Periods are not a women's issue. Period.

In Amsterdam, roughly one in five people live below the poverty line. Among them, an estimated 26,000 people experience period poverty – the lack of access to sanitary products due to financial constraints. At the base line, this creates physical and mental discomfort. At a deeper level, it causes (further) inequality: students missing out on school during their menstruation or parents skipping work due to the lack of products. It shows that period poverty is not merely a feminist issue, but is one of wellbeing and equality.

At Neighborhood Feminists, the belief is that dignified menstruation is a basic human right. As coordinator Nicole Römer puts it during our interview: “everyone deserves to have their periods in a dignified, hygienic way, without having to worry about financial – or other – access.” The organisation was established in September 2019, when its three founders – all with a background in feminist activism – realised that period poverty was a largely overlooked problem in Amsterdam. Born out of a desire to work on direct impact projects, they came up with the ‘Dignity Kit’ – a package containing essential toiletries and period products for those in need.

The organisation currently supplies around ninety Dignity Kits on a monthly basis. While period poverty affects many other members of our community, the social stigma surrounding both menstruation and period poverty often makes it hard to reach them. Therefore, Neighborhood Feminists recognises the importance of advocacy on the topic and the stigmas surrounding it: “These stigmas complicate the problem as well as the solution, as they prove to be an obstacle in the public distribution of period products. Many people don’t want to ask for them or even want to be seen taking them from a supply-closet. Our ultimate goal would be to make our government and lawmakers aware of this problem, and to have them take over – ideally by making period products free for everyone, like in Scotland. That’s the interesting dynamic in projects like ours – we always work towards the obsolescence of our own organisation.”

Neighborhood Feminists’ community-based, direct action approach to period poverty proves the importance of intersectionality. “The only way to solve the problem is to address all the underlying issues. People who are at or below the poverty line often won’t have paperwork and/or secure housing, which can also limit their access to running water. Moreover, cultural differences and sustained trauma affect their needs with regard to period products. This is why we hardly provide menstrual cups, for example, despite the obvious environmental benefits. Other questions we run into include those of gender. When providing free period products in public spaces, do you only put these in the ‘women’s’ toilet? Because period poverty also affects those who don’t identify as female.”

It shows how something seemingly small, like a Dignity Kit, can unravel a lot of underlying issues. This might be daunting at first, as it magnifies the problem, but it also makes it possible to come up with tangible solutions. As Nicole puts it, “action in the community is always going to make a difference, however small it may feel. It’s where we need to start.” Next on the Neighborhood Feminists’ agenda, alongside the continued Dignity Kits project and period advocacy efforts, are the realisation of a queer space in Zuidoost and contributing to the development of an inclusive sexual and reproductive rights programme: “we are a small organisation with big dreams. Long term we hope to assist in making both legal aid and therapy accessible for undocumented migrants and other people in need.” As long as it’s needed, Neighborhood Feminists will keep fighting tirelessly for equality within Amsterdam, supported by a growing number of donors and volunteers. Will their work ever be done? We bloody hope so.

Are you inspired by this article and the work that’s being done by Neighborhood Feminists? We have asked the organisation how our community can get involved, and their answer was as follows: 1. Learn. Visit the Neighborhood Feminists’ website and socials for more information, including sexy infographics! 2. Share. A lot of people are surprised to hear about the magnitude of period poverty in Amsterdam and the Netherlands. Help us spread the word! 3. Donate. Neighborhood Feminists rely on your donations to provide Dignity Kits and to continue their advocacy efforts. For 15 euros you can guarantee one worry-free period for someone in need!

Find out more about Acts Worth Knowing here.

"Action in the community is always going to make a difference, however small it may feel. It’s where we need to start" 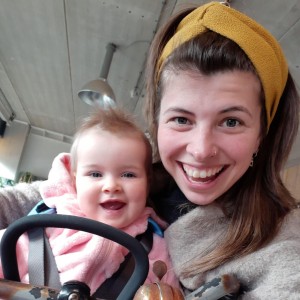